Peyronie’s Curvature Improvement is Quantifiable!
It’s not a Guessing Game

Healing Peyronie’s Disease is Easy as 1,2,3

After booking your doctor’s appointment, the first step is your new Peyronie’s patient visit. Our doctors want to know your symptoms, if you’ve already been diagnosed with Peyronie’s disease, any prior treatment methods you already tried, the degree of visible curve you encounter upon erection, and how long you’ve been dealing with plaque and curvature issues. Additionally, it’s helpful if you take photographs of your penis when erect and bring them with you to your first consultation appointment.

Next, we’ll take steps to create a comprehensive picture of the amount of plaque build up within your penis and analyze any other issues that might be hindering your penile performance or pain. This “picture” is produced from ultrasound imagery – you’ll be able to confirm your progress from treatment through the process: this isn’t a guessing game.

With this data in hand, we’ll be able to create a customized healing roadmap for your condition.

Peyronies Disease: What is it?

Listed below are common symptoms associated with Peyronie’s Disease: Pain – The majority of patients find that erections are painful. Pain often occurs during orgasm, as well

Ask About the Peyronie’s Treatment to Correct Penile Curvature

Before Our New CurveFree® Technology?

Until now, “no medical therapy has been proven effective for the treatment of Peyronie’s disease[1].”

“Surgical treatment may be an option for some patients, although complications as well as loss of penile length are common outcomes”[2].

A wide variety of treatments have been used over the years in an attempt to arrest the pain and symptoms associated with Peyronie’s Disease with limited success. These treatments include including: Radiation, Verapamil, Collagenase (Xiaflex), Interferon, Traction Devices, Iontophoresis, Surgery, Implants, plus varied Topical Applications, Vitamin E and Herbal Remedies.

Oral vitamin E: An antioxidant that is a popular treatment for acute stage Peyronie’s disease because of its mild side effects and low cost. While studies as far back as 1948 have demonstrated decreases in penile curvature and plaque size from vitamin E treatment, most of these studies have not used placebo controls. Those few studies of vitamin E that have included a placebo treatment group have demonstrated that vitamin E does not appear to give better results than the placebo, which calls into question whether or not vitamin E is an effective treatment.

Potassium amino-benzoate: Also known as Potaba. Small placebo-controlled studies have shown that this B-complex substance popular in Central Europe yields some benefits with respect to plaque size, but not curvature. Unfortunately, it is somewhat expensive and use of the medication requires taking 24 pills a day for three to six months. This medication has also been associated with a high rate of stomach upset, which leads many men to stop taking it.

Tamoxifen: This non-steroidal, anti-estrogen medication has been used in the treatment of desmoid tumors, a condition with properties similar to Peyronie’s disease. Unfortunately, placebo-controlled trials of this drug are rare and the few that have been conducted have not shown that Tamoxifen is better than placebo.

Colchicine: An anti-inflammatory agent that decreases collagen development. Colchicine has been shown to be slightly beneficial in a few small, uncontrolled studies. Many patients taking colchicine over the long term develop gastrointestinal problems and must discontinue the drug early in treatment. It has not been proven to be superior to placebo.

Carnitine: An antioxidant medication that is designed to reduce inflammation and thereby decrease abnormal wound healing. Like many other Peyronie’s therapies, uncontrolled trials have demonstrated some benefit using this treatment but a recent controlled trial has not demonstrated it to be superior to placebo.

Injecting a drug directly into the plaque of Peyronie’s disease is a common form of treatment for Peyronie’s.

Two drug platforms have been used – each with limited success:

Verapamil is one of the most popular treatments, its injected directly into the plaque built up in the penis. Although it helps to soften this plaque in hopes of breaking it down – its just not strong enough to effectively treat anything but the mildest beginning cases. 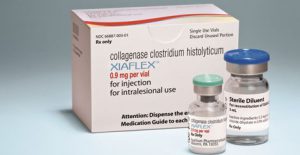 is used only when the original curve is greater than 30 degrees – since that’s when major insurers will provide reimbursement as the drug is very expensive.

The launch of Xiaflex as a possible solution for Peyronies caused a stir during its launch in 2012. But a key researcher in the tests and trials that supported its introduction was more low-key. The results “are not overwhelming and dramatic,” said Dr. Culley C. Carson III, a professor of urology at the University of North Carolina and an investigator in the trial. But, he added, “it’s a major advantage over what we have now, which is nothing.”

Surgery for Peyronie’s is currently only indicated in the chronic, stable state of the disease in patients with a degree of curvature that does not allow for sexual intercourse and/or causes pain.

Surgery is used to completely remove the buildup of plaque within the penis but this is a last resort method. Peyronie’s Disease Surgery can have serious complications and side effects such as shortening of the penis and ED. Implants are another method to try and fix Peyronie’s Disease that involved surgery. Once again the complications and side effects are great and men should consider every other option before going down this road.

A first-ever retrospective study on the long term efficaciousness of Peyronie’s disease completed in 2012 offered a dismal view on the success of such surgery with healing Peyronies. According to a recent retrospective study published by Florian Wimpissinger, MD, of the department of urology at Rudolfstiftung Hospital in Vienna, Austria in 2012 regarding the long term outcomes associated with PD surgery, results are anything but ideal.

“We saw that results tend to worsen with time,” said Dr. Wimpissinger, who presented the study results at the 2011 European Association of Urology annual congress in Vienna.  “Since these results were much better during the first months or few years following surgery, it can be assumed that all these aspects are caused by the chronic/recurring nature of PD,” Dr. Wimpissinger said.

“From what we found after many years of follow-up, all published data on the results of PD surgery have to be interpreted in a different light,” said Dr. Wimpissinger.

CurveFree® is a patent-pending, non-invasive process that effectively heals Peyronies Disease – a penile condition affecting between 5-15% of all men resulting in painful and embarrassing penile curvature when erect.

Peyronies disease is caused by damaged, hardened penile tissue that results in a severe curve during erection.

Its also progressive – minor bending almost always evolve into major curvature over time: reducing sexual pleasure & sensation for both parties, reducing penile length, and causing consequential distress plus self image challenges for affected men. Surgical outcomes to repair the condition are shown to provide poor long-term results. Finally, the most highly touted drug treatment: Xiaflex® – only achieves consequential curve improvement in a minority of cases – and can’t be safely utilized in many Peyronie’s patient circumstances.

We have the technology that changes all this.